Two of our favorite post-summer season events have come and gone as 2013 draws near an end. Both Bikefest and the Lake of the Ozarks Air Show continue to grow with 2013 being the most successful year yet.

The 7th Annual Bikefest was held September 12 – 15. We couldn't have wished for better weather over all four days of the event as not one drop of rain fell, making perfect riding conditions around the entire Lake area. A selection of photos highlighting the vendor, activity and concert areas can be viewed at our Flickr page here: http://bit.ly/17HGxHS

We were also blessed with another day of beautiful weather for the Lake of the Ozarks Air Show on September 21st. Sunny and cloudless blue skies provided a perfect backdrop for a tribute to our military veterans and aerobatic acts as they took to the sky over Camdenton Memorial Airport. You can view our selection of Air Show photos on our Flickr Page here: http://bit.ly/18VkU47


Both Bikefest and the Lake of the Ozarks Air Show are annual events and plans are already forming around the 2014 season. If you missed out on the action this year, make arrangements to visit us next September. Visit www.funlake.com for all of your lodging, dining, attractions needs and more!
Posted by Lake of the Ozarks at 1:36 PM No comments: 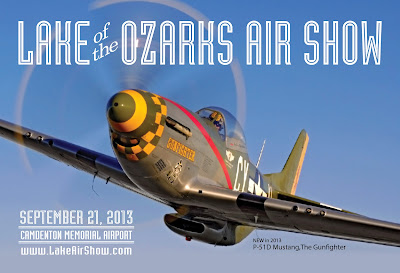 Aviation acts for the 2013 show include the Commemorative Air Force - Missouri Wing's AC-47 "Spooky" Gunship, which saw action in Vietnam, the TBM-3E "Avenger," which was utilized during the Korean Conflict and the P-51 Gunfighter, which took its place in history in 1945. This year's lineup also features stunt flying by the Erik Edgren and Team Vortex air shows, as well as performances by the KC Flight Formation Team and Free-Fall Express Skydivers. The show's organizers note the event is enjoyed by people of all ages - from the Korean and WWII veterans who remember the roaring sound of the plane engines to children who wait for the event's Ping-Pong ball drop. For a full schedule of Air Show acts and events , visit www.lakeairshow.com.

Attendance at the show has grown exponentially, from 4,000 the first year to more than 14,000 last year, making it the largest single-day event in Camden County. "You know you're doing something right when they (attendees) tell other people and those people come, too," Camdenton City Administrator Brenda Colter said.
The show's location at the Lake is part of its draw for visitors, according to Airport Manager Corey Leuwerke. "People come to the airshow and get to spend a weekend at the Lake," he said.  However, the event benefits the Camdenton community in many ways. Local civic organizations are vendors of food at the event, reinvesting the proceeds into the air show or their own community projects.

With all it has to offer, the Lake of the Ozarks Air Show is an event for everyone. Camdenton Chamber of Commerce Executive Director Trish Creach sums it up this way: "This is a top-notch, do-not-miss, must-attend air show at the Lake!"

To view photos from the 2012 Lake of the Ozarks Air Show, visit our Flickr gallery at http://bit.ly/1e9i4jZ. For lodging, dining and other Lake Area attractions, visit www.funlake.com.

Posted by Lake of the Ozarks at 9:50 AM No comments:

Lake of the Ozarks Bikefest 2013 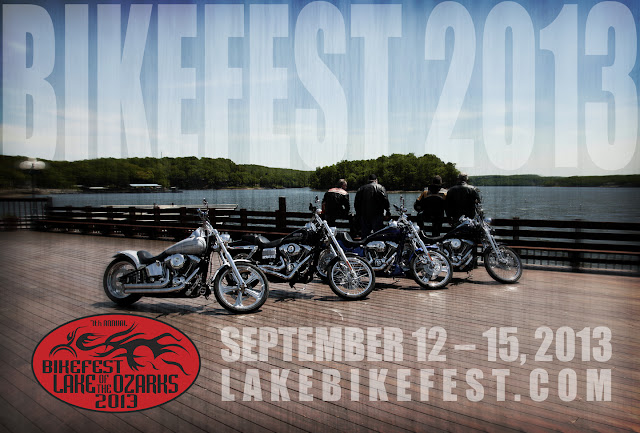 The rumble of rolling thunder in mid-September can mean only one thing at the Lake of the Ozarks - Bikefest. Now in its seventh year, Bikefest 2013, Sept. 12-15, is expected to bring more bikers, more vendors and more events and concerts to the Lake.

Bikefest's official website - www.LakeBikefest.com - offers participants printable maps of three recommended rides. An 84-mile ride showcases the beauty of Bennett Spring and Ha Ha Tonka state parks and takes less than two hours. Roads that are part of historic Route 66 are included in the three-hour, 115-mile ride that includes a stop at Devil's Elbow. A 96-mile ride around the Lake of the Ozarks takes a bit over two hours and shows riders a number of beautiful vistas around the Lake.

"Motorcycling is about the joy of riding," Jack Fleming of Lake of the Ozarks Harley Davidson said, noting the hills and curves of the roads around the Lake are enjoyable for riders. Fleming and other organizers of Bikefest know riders who come to the Lake of the Ozarks are certain to spread the word that the Lake is, in Fleming's words, "a great destination for motorcycle riding year-round."
However, there are plenty of other reasons approximately 10,000 people travel to the Lake for Bikefest each year. "The Lake is tailor-made for bikers and motorcycle enthusiasts," Jacobsen said. "With more than 200 bars and restaurants, plus vendors, events and activities brought in just for Bikefest, the Lake gives attendees just what they are looking for."

This year's Bikefest will feature five vendor villages - at Dog Days Bar & Grill, Camden on the Lake, Lake of the Ozarks Harley-Davidson, Dam Bait Shop, and on the historic Bagnell Dam Strip - as well as two bike giveaways, a bike auction, more than 50 live concerts, extreme motocross events and more.  More details and a complete schedule can be found at www.lakebikefest.com

The vendor villages feature all types of vendors, though Fleming notes most everything is motorcycle-related. Visitors can expect to see leathers, custom painting, lights and even bike-builders.  The vendor village at Camden on the Lake will play host to well-known bike builders Strip Club Choppers, Silver Wraiths Choppers, Billy the Kid Custom Cycles and Schaaf's Cycle Garage, plus Curry's Hot Rods.

Along with the vendor villages, Rhonda Martin from Camden on the Lake credits the weekend's music for drawing people to Bikefest.  "They (attendees) are here to have fun," she said, "and the music is a part of that."  Evening concerts around the Lake will feature tribute bands including: "Dead or Alive," a Bon Jovi tribute; "Silver Bullet," a Bob Seger tribute; "Paradise City," a tribute to Guns and Roses; AC/DC tribute band "Hells Bells"; and "Special Forces," a tribute to 38 Special. Though she expects the lots around her property will be filled with motorcycles, Martin says there will be overflow parking and shuttle service. "Everybody, and I mean everybody, should feel free to come down for Bikefest," she said.

Find lodging, dining and other area attractions to enhance your 2013 Lake Bikefest experience at www.funlake.com.
Posted by Lake of the Ozarks at 3:55 PM No comments: