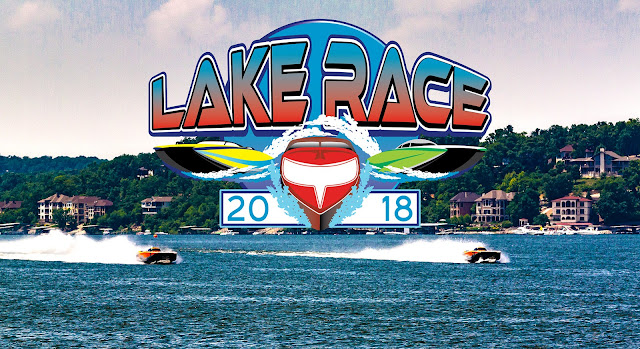 A week of speed-themed activities bookends one of the fastest-paced events at the Lake of the Ozarks, the 2018 Lake Race, Saturday, June 2.

The Lake Race is one of two powerboat races that take place at the "Best Recreational Lake" in the Nation and features some of the fastest boats from all over the country as they compete for big prize money and bragging rights. 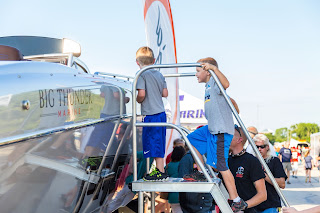 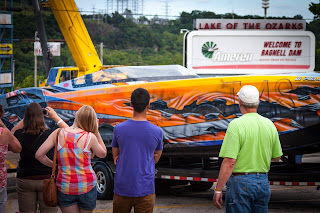 On Friday, June 1, the lower area of the historic Bagnell Dam Strip in Lake Ozark, from west end of the "Strip" to the dam, will shut down to traffic and transform into the Lake Race headquarters. There will be a  Lake Race Street Party at 5 p.m., complete with a family-friendly race "village" where the public can meet the racers and check out all the impressive power boats.

The official Offshore Powerboat Association-sanctioned Lake Race gets underway on Saturday morning with the opening ceremonies beginning at 10:40 a.m.  at Beavers at the Dam restaurant, 1076 Bagnell Dam Boulevard. All the high-speed excitement kicks off at 11 a.m. as competitors thunder across the officially designated four-mile race course to see who can clock the fastest  time. The races last until 5 p.m., at which point all competitors will have completed their heats. There will be designated anchor spots along the course for attendees viewing the races from their boats. On land, spectators will be able to watch all the thrilling action from prime viewing spots along Bagnell Dam as well as at many of the sponsoring establishments as boats run from the zero-mile marker to the four-mile marker of the Lake of the Ozarks. 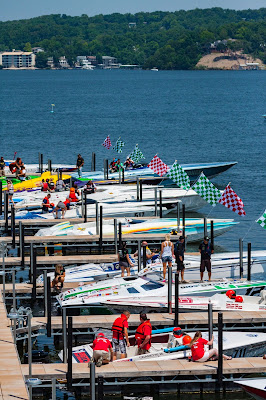 The winners of the 2018 Lake Race will be announced that evening during the award ceremony held at Camden on the Lake Resort, 2359 Bittersweet Road in Lake Ozark. Afterward, back at the Bagnell Dam Strip, there will be an after-party with live music and entertainment.

In the days following the boat race, other events include the Lake Race Poker Run from Camden on the Lake on Friday, June 8, the Lake Race 5K fun run/walk race along the Bagnell Dam Strip on Saturday, June 9 and the "Paddle Battle" kayak race at Super Dave's Paddlecraft Adventures located at Frankie and Louie's Beachfront Bar and Grill, 1028 Deer Valley Park in Sunrise Beach, on Tuesday, June 12.

For more details on all the 2018  Lake  Race events and a full list of viewing locations and participating sponsors, visit www.LakeRace.com.

To get additional information about all the fun  events,  attractions  as well as  dining  and lodging options available  at the "Best Recreational Lake" in the nation, call the  Lake of the Ozarks Convention & Visitor Bureau  (CVB) at  800-FUN-LAKE , or visit the CVB's award-winning website at  www.FunLake.com .

Posted by Lake of the Ozarks at 8:32 AM No comments: 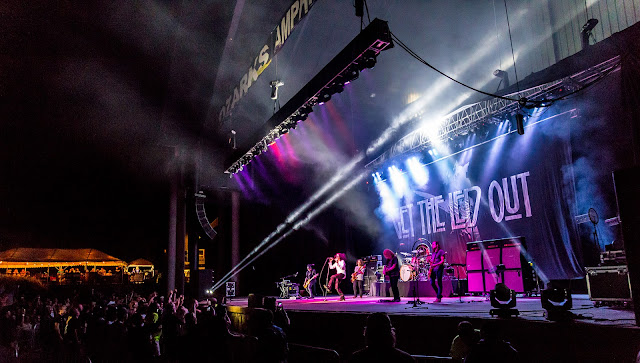 Live music is an integral part of living the "Lake life" at Central Missouri's Lake of the Ozarks. On any given day during the summer months, visitors can enjoy live music performed by local artists and big name acts at nearly all of the 200 restaurants and bars, as well as resorts and entertainment complexes at the "Best Recreational Lake" in the Nation. And, two of the area's biggest outdoor venues host legendary recording artists during their summer concert series.

Shawnee Bluff Vineyard, located off Highway 54 at 8 Tolwood Road in Eldon, has for years hosted many nationally-acclaimed musical acts. The 2018 concert series at the sprawling 40-acre vineyard kicks off with "Chicks with Hits," a concert featuring celebrated female country vocalists Terri Clark, Pam Tillis and Suzy Boggus on Saturday, May 12. 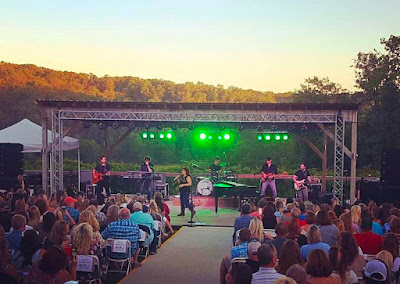 On Friday, June 1, Shawnee Bluff hosts an evening of alternative rock heavyweights from the 1990s. Gin Blossoms, who dominated the '90s air waves with their pop singles "'Til I hear It From You," "Hey Jealously," "Allison Road," and "Found Out About You," will be joined by Tonic and Vertical Horizon. In Addition, t he month of June sees several big-name country bands play the vineyard stage. Diamond Rio comes to the Lake of the Ozarks on Friday, June 8, followed by Steve Earle and The Dukes on Friday, June 22. In celebration of the 30th anniversary of his hit country-rock album "Copperhead Road," Earle and The Dukes will be playing the celebrated album in its entirety as well as many of his other hits. The Grammy-nominated Cam brings her brand of wildly successful pop country to Shawnee Bluff on Saturday, June 30. 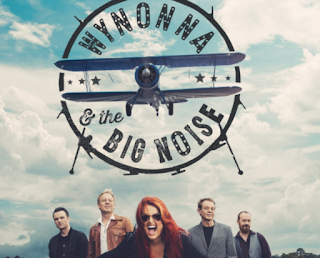 The rest of the summer sees other successful country artists as well as legendary rock bandsSara Evans plays on Saturday, July 7 and Survivor, best known for their double-platinum hit "Eye of the Tiger," plays on Saturday, July 28. Half of country music's biggest hit making mother-daughter team of the '80s and '90s, the Judds,Wynonna and The Big Noisewill entertain crowds at Shawnee Bluff on Saturday, Aug. 25. September sees the Bellamy Brothers playing on Friday, Sept. 7 and the vocal talents of the Oak Ridge Boyson full display on Friday, Sept. 28. The Shawnee Bluff Vineyard summer concert series concludes with the raucous rockabilly sounds of  Reverend Horton Heat on Saturday, Oct. 13.
playing the vineyard stage. Country Music Award-winning performer.

Nearly all shows are billed as being all-ages shows with doors opening at 5 p.m. Headliners take the stage at 8 p.m. during each concert, followed by professional fireworks displays at the close of the evening. Tickets for the shows range from $20 - $89 per person. For more details on the performers, or to order tickets, either call 573-365-1100 or visit www.ShawneeBluffWinery.com/concerts.

Aside from these notable acts, Shawnee Bluff Vineyard also features local artists every Sunday throughout the summer and their second location, Shawnee Bluff Winery in Lake Ozark, features live music every weekend throughout the year. For more information on both locations - the Vineyard and the Winery - as well as a full events calendar, visit  www.ShawneeBluffWinery.com. 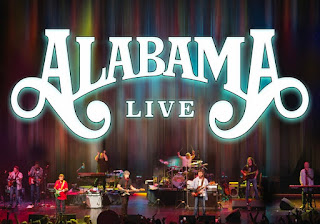 The Lake of the Ozarks' largest outdoor venue, Ozarks Amphitheater , marks the beginning of its 2018 summer concert series Memorial Day weekend with one of the most popular and successful country bands of all time, Alabama , on Saturday, May 26. Alabama, who charted over 40 number-one hits in their hayday, is joined by Montgomery Gentry.

In June, the amphitheater, which is located at  2629 North Business Route 5 in Camdenton, hosts a weekend double-header starting with the humorous tunes of comedian and country artist Rodney Carrington on Friday, June 15. The next day, the Grammy-winning progressive heavy rock outfit Mastadon join the experimental funk-rock band Primus on Saturday, June 16. 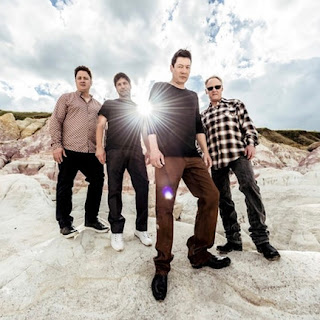 On Saturday, Aug. 11, two celebrated groups come to the Lake with performances by alternative Big Head Todd and the Monsters and the latin-infused rock and roll sounds of Los Lobos.
rock band

For Labor Day Weekend, Ozarks Amphitheater welcomes back the Grammy-nominated, multi-plantinum recording artistAaron Lewis on Saturay, Sept. 1. To close out the summer concert series, Get the Led Out, hailed as the "American Led Zeppelin," brings the British rockers hits to life with their musically-precise two-hour set on Saturday, Sept. 22.

For most shows at the amphitheater, doors open at 6 p.m. with music starting at 7 p.m. Depending on the artist, tickets for each show run from $20 per person up to $600 for VIP seating for four.  For more information on the Ozarks Amphitheater, or to order tickets for the upcoming concert series, please call 573-346-0000 or visit www.OzarksAmp.com . 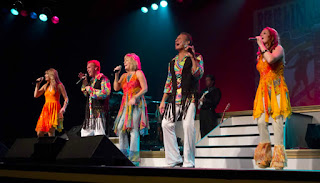 Of course, the previously mentioned concerts are not the only opportunities to see live music at the Lake of the Ozarks this summer. In addition to events taking place at the different restaurants, bars, resorts and entertainment complexes, Main Street Music Hall, 5845 Osage Beach Parkway in Osage Beach, has been entertaining audiences for over 20 years with their different musical programs. The Music Hall's shows take place from late April through December and include the Best of Main Street Opry variety show as well as the Reelin' in the Years revue that includes hits from the '60s, '70s and '80s. Details on the Main Street Music Hall can be found at www.LakeMusicHall.com or by calling 573-348-9500.

For more live music taking place around the Lake this summer, visitors should head to the event calendar at www.FunLake.com or check the websites or Facebook pages of their favorite restaurants, bars and other venues.

To get additional information about all the fun events, attractions as well as dining and lodging options available  at the "Best Recreational Lake" in the nation, call the  Lake of the Ozarks Convention & Visitor Bureau (CVB) at  800-FUN-LAKE, or visit the CVB's award-winning website at www.FunLake.com .
Posted by Lake of the Ozarks at 4:01 PM No comments: