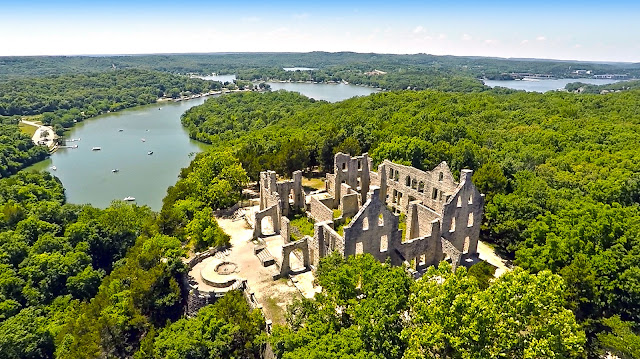 In a recent article published by Condé Nast Traveler, the Lake of the Ozarks' Ha Ha Tonka State Park, located at 1491 State Highway D near Camdenton, was named the most beautiful place in Missouri. 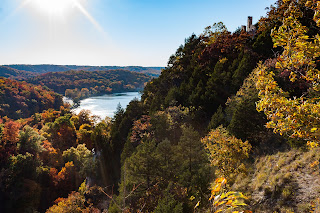 The article, which listed the most beautiful and compelling place in each of the 50 states, urges readers to consider the list as a "starting point to the most epic cross-country trip ever."

According to Condé Nast: "Picking just 50 places isn't easy, but we polled our Facebook followers, did some digging and came up with this list of the must-see, must-visit spots in each state. Of course, it only scratches the surface of what this country has to offer, so consider it your starting point and start exploring."


Central Missouri's Lake of the Ozarks, named the "Best Recreational Lake in the Nation" by readers of USA Today, is worth a road trip all on its own. The Lake of the Ozarks covers 54,000 acres with 64 billion gallons of water stretching 92 miles end-to-end across a four-county area. The Lake boasts myriad attractions and events as well as over 200 restaurants and nightspots and more than 50 marinas for on-the-water fun along its 1,150 miles of shoreline. 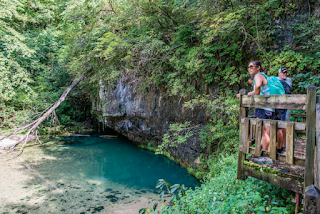 However, Condé Nast honed in on the area and named Ha Ha Tonka as the "Show-Me" state's must-see, must visit destination.  Widely considered one of the shining jewels of the Missouri State Parks system, Ha Ha Tonka also was voted the fourth-best state park in America by readers of USA Today a few years back.

"We're thrilled that Ha Ha Tonka State Park has been recognized as the most beautiful place in Missouri," says Jim Divincen, administrator for the Lake of the Ozarks Tri-County Lodging Association. "The park truly is stunning and we hear time and time again from many of our vacationers that Ha Ha Tonka is the highlight of their trip. It's one of many reasons why five million visitors come to the Lake of the Ozarks each year."

According to Ozark folklore, the park's name  - Ha Ha Tonka - is derived from the local Osage Native American phrase thought to mean "laughing waters," in reference to the large natural spring that pumps out over 48 million gallons of water per day. 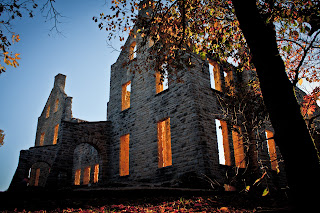 The park's main attraction is the ruins of the 20th century "castle" perched high on a bluff overlooking Ha Ha Tonka Spring and the Lake of the Ozarks. The skeletal stone structure was originally constructed as an opulent country escape for Robert M. Snyder, a wealthy Kansas City business man who perished in one of Missouri's first automobile accidents. Snyder never lived to see his dream realized but the home was completed by his sons and later operated as a hotel before being gutted by a fire in 1942. In addition to the outer walls of the estate, a stone water tower also remains to stand sentry over the park.

Over 520,000 visitors trek to Ha Ha Tonka annually to explore the ruins as well as the 14 different hiking trails and the numerous natural highlights, including the spring, which is the twelfth largest in the state. 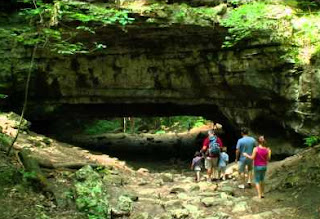 The park is Missouri's premier showcase of karst geology and features a massive natural bridge, a steep-sided sinkhole named "The Colosseum," a 150-foot deep sink basin with two bluff shelters that were used as hide-outs by bandits in the 1830s and 250-feet high bluffs that tower above Ha Ha Tonka Spring.

The park also is home to one of Missouri's best examples of a woodland landscape as well as several large glades. 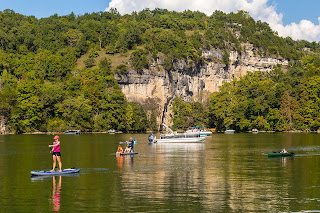 Located on the Niangua arm of the Lake, Ha Ha Tonka State Park is accessible by water as well as by land and offers opportunities for fishing and swimming in addition to boat docks, picnic tables, pavilions and a visitor center complete with a topographical map of the park carved out of stone. Ha Ha Tonka is open year around from 7 a.m. until dark and admission is free.